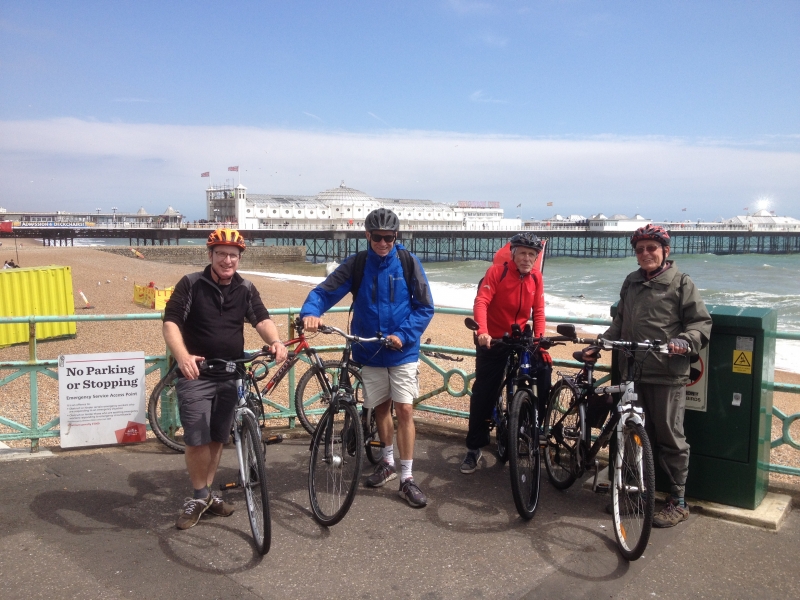 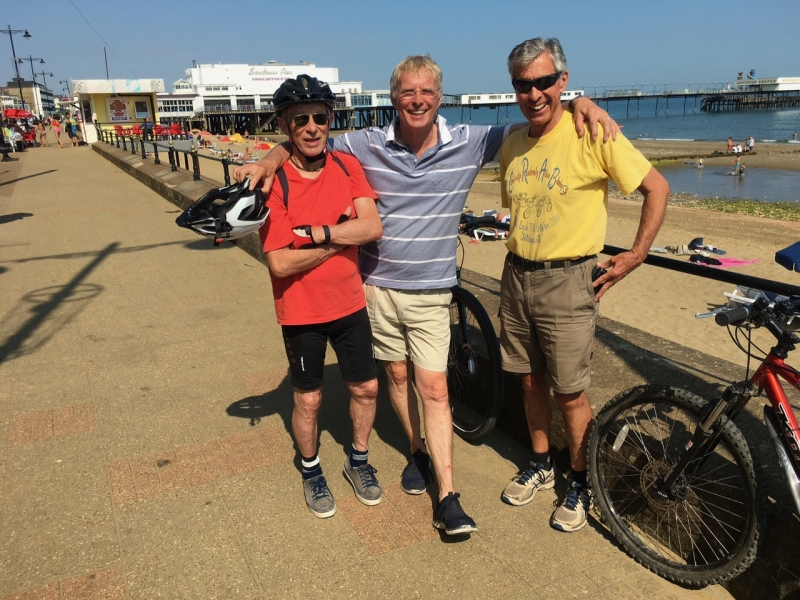 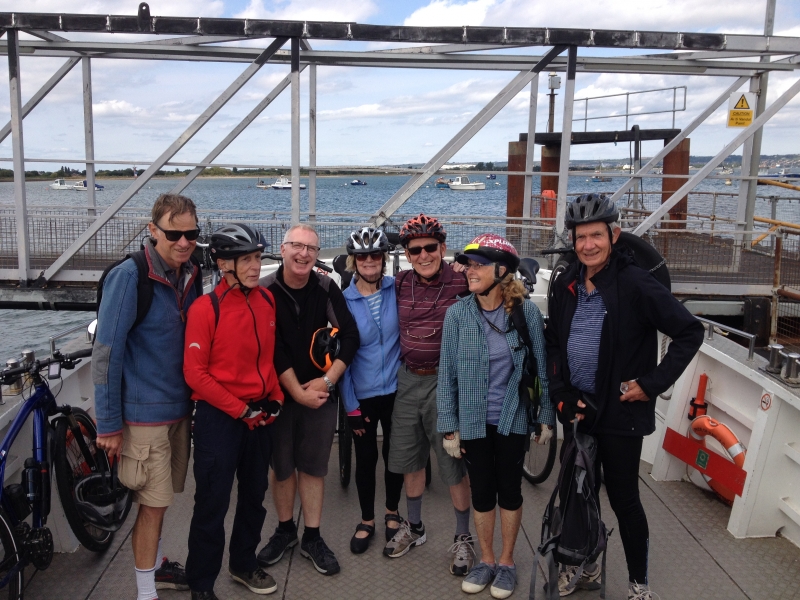 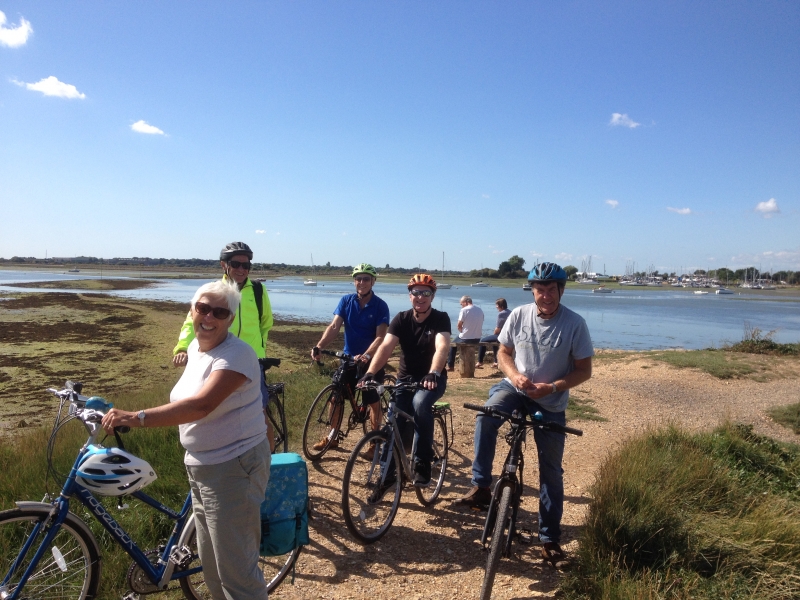 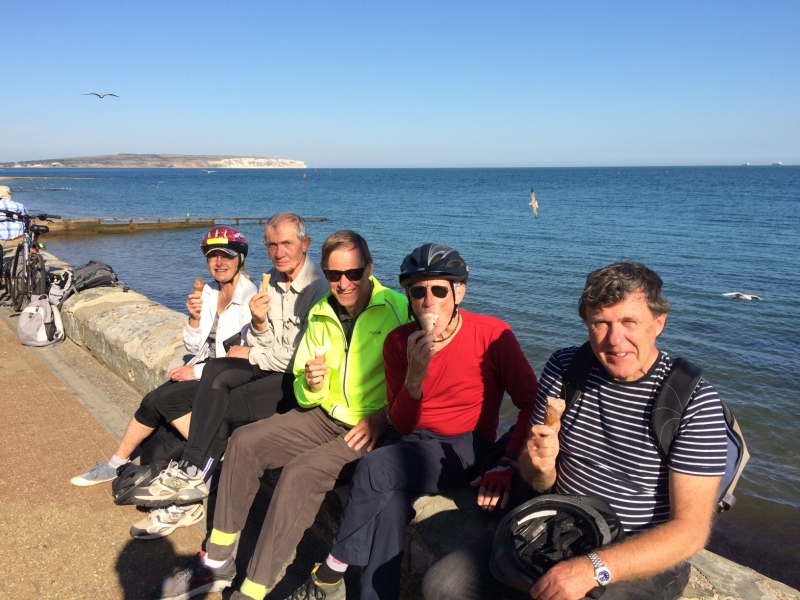 In normal times the cycling group meets twice a month on the second and fourth Thursday, all year round (unless the weather intervenes). The rides we do are varied: many start in or near Chichester and enjoy the beauty of the coastal plain, while for more variety we sometimes take a train and explore a wider area (when Southern Rail is reliable!). Occasionally we plan a 2 day event – in the New Forest or the Isle of Wight for instance.

We prefer to avoid main roads and cycle on quieter lanes, dedicated cycle paths and well maintained bridle ways. Rides are typically 12 to 16 miles, starting at 10:00 until lunch-time, and punctuated by at least one refreshment break; and we normally end at a pub giving an opportunity to finish off with lunch for those who want to stay.

Unfortunately during corona-virus lock-down, there can be no official program. But on the second and fourth Thursdays of each month we invite you to do your own ride at 10:00 (or a different time that suits you better), take a couple of selfies and any other interesting snaps on your ride, and we will plan to have a Zoom group meeting at around 11:45 to keep in touch, exchange news and review each other’s photos. I have added a few possible routes for you to try in the next section.

The group currently has vacancies so if you are looking for an enjoyable way to keep fit tempered by some pleasant social interaction this is the group for you.
Back to top

In the current corona-virus lock-down, it’s unfortunate that we cannot go out riding in a group. However we are permitted some time outdoors to keep fit… and cycling is a very good way to do that. Here are some links to a few local routes for you to follow on your own or in family groups. They all start in or around Chichester, and there are some alternative route for a bit of variety.

Routes based around West Dean and the Centurion Way:

Tesco via the Centurion Way to West Dean – 5.6 miles

Lavant via Funtington to Bosham – 7.55 miles

Tesco via Woodmancote to Bosham- 10.5 miles

Woodmancote to The Deck, Emsworth – 2.94 miles

The Deck, Emsworth to Bosham – 4.5 miles

Tesco to EastHead via Birdham – 10 miles

Fishbourne via Itchenor (ferry *) and home via Birdham – 12.24 miles

Unfortunately during corona-virus lock-down, there can be no official program. But on the second and fourth Thursdays of each month we invite you to do your own ride at 10:00, take a couple of selfies and any other interesting snaps on your ride, and we will plan to have a Zoom group meeting at around 11:45 to keep in touch, exchange news and review each other’s photos.

I billed this ride as an “adventure” – and it did turn out a bit of an adventure – but not for the reasons I had anticipated. The plan was “buy a return train ticket to Angmering but get off at Barnham”. Peter skimmed this a bit too quickly and as the rest of us gathered on Barnham station we realised Peter had not got off the train! What a blessing mobile phones are in such circumstances. We were able to make arrangement to meet up with him at some point along the trail.

The rest of us set off on the bit I thought was going to be the adventure – making our way down to the Felpham seafront from Barnham. This involved some footpaths I hadn’t checked out – they worked out fine – then crossing an estate so new google earth still showed a building site. It all turned OK – with the estate designers building in some very friendly cycling/foot paths – and surprising Rod how quickly the route brought us to the coast.

Felpham is enlightened enough to allow cycles along the prom so we enjoyed the views until the shingle forced us inland – up to the A259. Here we met up with Peter again and cycled along the newly completed cycle track alongside the A259 until we could escape to the shoreline again at Climping.

We could have had refreshments here but Rod urged us to push on to the “iconic” East Beach Cafe in Littlehampton, built out of iron and famous for its rusty patina (and its coffee). But before we reached this we first had to get to Littlehampton. This provided another bit of adventure as the path we were following became too narrow and shingly to manage on a bike. Rod found the answer – cycle along the firm sand below the shingle line – fortunately the tide was out.

Littlehanpton is also enlightened regarding cycling along the prom, which we did until finally turning inland at Angmering and enjoying a relaxing lunch in the quiet garden of the Windmill Inn.

“Bugger Bognor” as George V was heard to remark and certainly appropriate as six of us set off from Chichester to Bognor in sweltering weather conditions.

We managed to avoid the horrendous traffic jams on the main roads as we stuck to the cycle paths heading south. After half an hour of cycling there were plenty of opportunities to admire the superb houses of Aldwick and Felpham. As we reached the coast we took in a long stretch of crowded beach which was later to be established as the hottest July day in history although a good breeze made it seem quite pleasant.

Our drink stop was at the delightful Crab Pot beach café where we hydrated before heading inland towards Bognor. We passed the Chichester university campus in Bognor before skirting Butlins – nostalgic for me as I worked in the kitchens as a greencoat in my student days.

The end of the ride was at the Fountain, Southgate where we discovered the only Badger Beer outlet in town – anyone for Tangle Foot or a Fursty Ferret?

Thanks to Bill Twinn for the ride report.

Five of us met at the Chichester Canal Basin and headed south along the canal. After many twists and turns on narrow paths we arrived at the Crab & Lobster for coffee. We then went towards the coast taking in Bracklesham and the Witterings. The lunch stop was at the Boathouse Cafe at the Chichester marina after which we headed back to Chichester. Our thanks to Simon for organising and leading a very pleasant 20 mile ride round the Manhood peninsular.

Thanks to Bill Twinn for the words and photo.

East Head and the Itchenor-Bosham Ferry, 17th May 2019

An intrepid band of 8, including new rider Mary, set off for this loop of the Bosham channel with warnings of fresh winds and possible showers. The photos confirm that the wind was indeed fresh – especially at East Head, and we also caught a small shower on the way, but nothing to daunt us. We arrived at East Head via the Saltern’s Way passing through Chichester Marina and staying off the main roads as much as possible.

A coffee stop in West Wittering was a welcome break before braving the windy coast for a view of the sea.

We returned home via Itchenor and the ferry to Bosham Hoe and the picturesque route alongside the channel to Bosham. This stretch was also enlivened by an over-courteous Rod who, stepping aside to allow pedestrians to pass safely, missed his footing in the long grass and tumbled down the banking towards the pond below. Happily he avoided going into the water and nothing was damaged or dented but his pride. Still it gave us something to talk about over a convivial lunch at the White Swan.

In spite of an adverse weather forecast, nine of us turned up for this “potter” up the Centurion Way to our favourite cafe in West Dean. We were expecting strong winds and regular showers. It turned out the report of showers was greatly exaggerated – though the wind warnings were correct – strong southerlies.

Sitting in the cafe garden with the sun warming us, an extension to the ride was suggested – cycle up the Monarch’s Way trail leading to the Trundle – whose big idea was that? Two of our number seemed to have something better to do and returned to Chi, but the remaining intrepid seven rose to the challenge. Nobody made the climb without pushing for a bit and making several pauses to bring our heart-rates back into range. But the views at the top made it all worthwhile.

No-one wanted to push on the last little bit to the Trundle itself, though we could see it above us. So we descended via a different, equally steep, path across Haye’s Down back to the Centurian Way and thence back to Chichester. All in all, given the inauspicious weather predictions, we were all glad we had made the effort and reaped the reward of a happy day’s ride.

Fortune in the shape of the fine day’s weather – blue skies and light winds – smiled on us Peppy, Colin, Andrew, Michael, Rod and Ray made their way by train to the Wightlink car ferry port in Portsmouth for the 10:30 crossing to Fishbourne. From here we made our way across Wootton Creek and followed a disused railway track and the Medina riverside path into Newport. (There were also one or two short sections of main road and one or two short sharp hills – but the memory forgets about those long-term!) In Newport we had a great lunch at the Bargeman’s Rest on the Quayside. 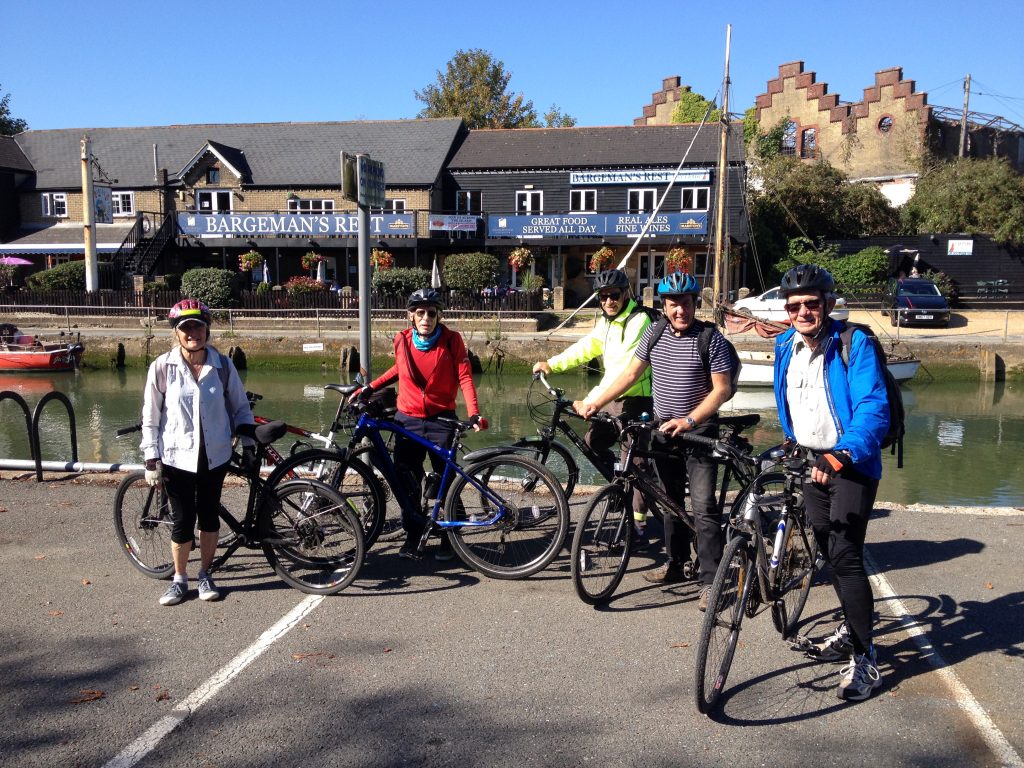 After lunch we followed one of Wight’s lovely bike trails – the Red Squirrel trail – another disused railway meandering its way down to Sandown passing through a varied, quiet landscape: woodland, nature reserves, farmland, alongside the higher reaches of the Medina, and then the eastward flowing river Yar. The trail was punctuated by the sites of the long disused railway stations this line used to serve until its closure by British Railways in 1956 (ten years before Beeching wielded his axe).

From Sandown with a few more miles still left in our legs and the sunny weather encouraging us we pushed on along the Esplanade to Shanklin for an ice cream in Toppings in the Summer Arcade, before setting off for home. 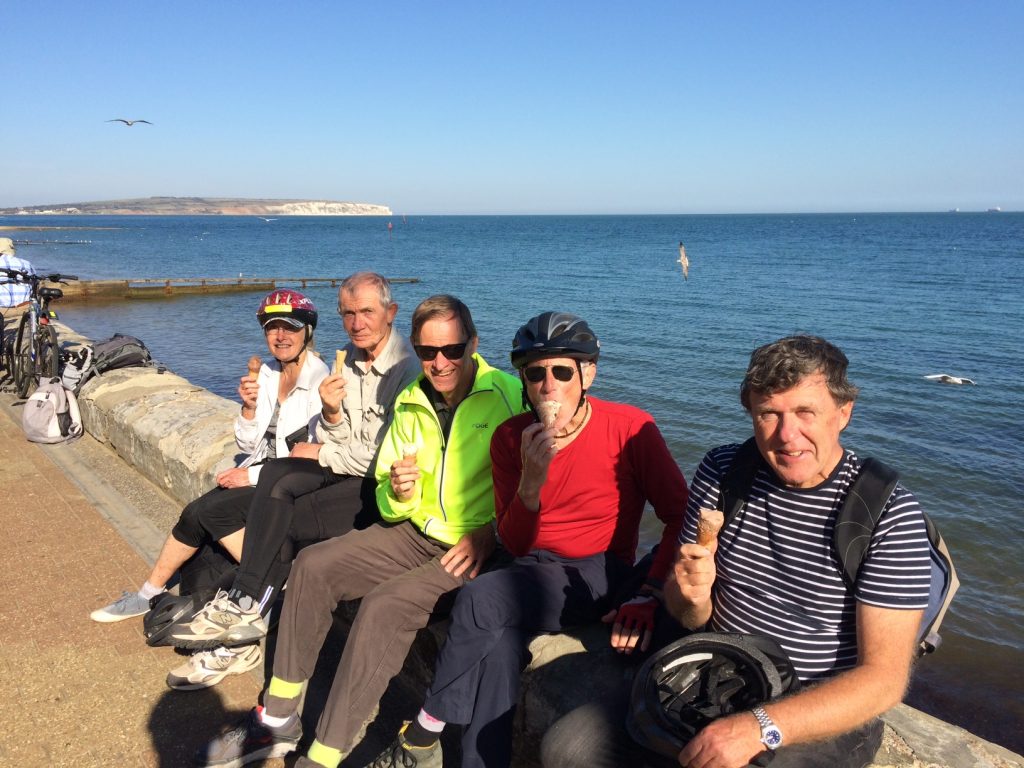 We had intended to take the Island train back to Ryde Pier Head, but remembering that that train only takes 4 bikes at a time the six of us decided to complete the loop and cycle directly back to Ryde along the main road. Everyone agreed it was a great day’s ride.

To contact the Cycling for Pleasure Group please use this form.

Security Code: For the box ‘Please enter the security code:‘ all you do is copy type the letters that you see in the ‘Security Code:‘ box above. This is to confirm that you are a real person and not a computerised spam bot.