Stoughton Down, Up Marden, North Marden and East Marden

‘Marden’ or ‘Maere-Dun’ is Old English for boundary down. There were boundaries between the kingdoms of South and West Saxons. We cross these boundaries to find magnificent views and ancient churches.

Up Marden, St Michael:
Closer to downland than to the village, elevated yet concealed, this church suggests secrets buried long in the past and undisturbed. In fact, one or two have been discovered: there are two chancel arches, for example, one supporting the other. The straight-lined Saxon arch may have been taken from the site of West Marden Chapel (demolished). 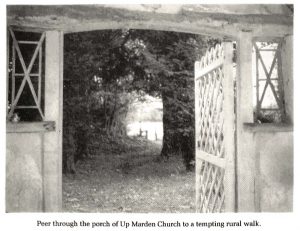 Otherwise this is a Norman church with 13th-century lancet windows, all intact and all with clear glass. There are rumours of bygone villagers running riot in the churchyard. Let us hope that they welcomed pilgrims walking from Winchester to Chichester. Their crosses are on the lintels of the south doorway. All is peaceful now; the church and the English countryside forming an idyllic scene.
North Marden, St Mary: The church stands modestly alone between farmyard and fields. It is a tiny, perfect piece of early Norman work. It is a single-cell church with no chancel arch but with a rare beauty: an apsidal or curved chancel. Miniature windows in the chancel emphasise its shape. The doorway is of Caen stone with fine moulding and topped by a stone cross. Stone must have been brought by packhorse from Chichester Harbour.
East Marden, St Peter: Surveying its village from a grassy mound, St Peter’s is at the centre of village life here. Crossroads below bring farm traffic, cyclists and ramblers. There is a covered, thatched well, a magnet for occasional visitors who chat or picnic here. The few flint cottages seem as venerable as the church but the oldest is probably 400 years old. St Peter’s has a Norman nave and Early English chancel. It is at least 900 years old. 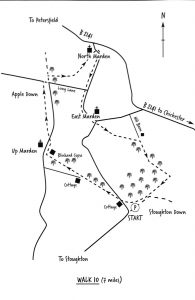 From Stoughton Down car park, turn right and walk along the road to ward East Marden. After about 200 metres, take the second footpath left on to a track to Wildham Barn Cottage. Keep this on your left as you go into Inholmes Wood. Stay on this footpath for about 1 mile. Ignore all cross-paths, keeping to the left of the copse as you emerge from the woods, and proceeding to a pretty, flint cottage on your left.

Here you turn right and cross a field to and through Blinkard Copse. You come out on the north corner of the copse and continue over a small field, through stables and to the road at Up Marden. Turn right and walk up the road to a track and footpath on your left to the church.

Return to the road, turn left and, after about 200 metres, take a foot path on the left which zigzags then heads north by Apple Down. There are views ahead: right to North Marden and left to the recently restored

National Trust house, Uppark. After half a mile you reach Long Lane, a tarmac road. Turn right along the road for a few metres then go left up a path at the edge of a field, with trees on your right. At a corner junction of paths, cross the stile and follow the path north-east, down through a strip of copse. Soon North Marden can be seen ahead to the left. First you have to descend to a valley, where you turn left. Follow the pre scribed path at the edge of the field then go over a stile and up to the church.

From North Marden Church, continue on the footpath towards the main road (B2141) but do not venture onto it. Follow the lane round to the right past renovated barns and a Georgian house. The lane then curves down between hedgerows for about 1 mile to East Marden. Here the church is above a grassy bank on your left.

When you leave East Marden Church, turn left on to the road and fol low it through the village. Turn right opposite a postbox and pass Post man’s Cottage, following a road which becomes a farm track. Keep south-east, passing the farm on your right. Ignore paths to right and left until you sink into Whitelands Copse. Cross the stile on the left and climb steep, open downland, heading east towards and past a small copse. Do not forget to turn for the view behind. A narrow path leads you to the track to Hillbarn. At this T-junction turn right and follow the track down through Wildham Wood. Look out for and turn right on a footpath away from the track. After a mile you reach the Stoughton road. Turn left here and Stoughton Down car park is on your left.