We are planning to run the AGM on 20th May as a Zoom virtual meeting once again. If you wish to attend you will need to download Zoom onto your computer (this is dead easy – see the guidance notes). We will be able to have all members attend the internet meeting this year, and live voting will be possible. Members unwilling or unable to attend the Zoom meeting will be able to cast their votes in advance by proxy: proxy voting forms can be found on the website (see below).  Here is the timetable:

A password-protected web page for the AGM has been set up, now including a link to the proxy voting form. The web address and password will be given in the email version of this Bulletin and in a separate email sent to members by the Hon. Secretary.

The following documents have been placed on the website:

As last year, if you have any questions you would like to put to the Committee please submit by post or email to be received by the Secretary by 14th May 2020. You can send your question by post to The Secretary, U3A Chichester, Box 809, Mailboxes Etc., 26 The Hornet, CHICHESTER, PO19 7BB, or through email by using the form below.

Coffee Morning Tuesday 4th May 10am on Zoom

Hurrah, it’s our Coffee Morning next Tuesday. We’ll be setting up Breakout Rooms again. You can choose to stay in the Main Room, visit the Groups Room, or take friends with you to a private room.

If you would like us to set up a private Breakout Room for your friends, please contact us here (still the Treasurer) so that we know how many rooms to set up.

If you are a new(ish) member, please contact us so we can welcome you, find out about how you would like to participate with the u3a, and introduce you to others.

If you have any questions about the u3a, any ideas for new Groups, any suggestions for how we can get together as the lockdown restrictions are gradually lifted, please come to the Coffee Morning and chat with us. If you’re feeling a bit down in the dumps, a good natter with other members will lift your spirits.

Look forward to seeing you next Tuesday – contact us  here if you have any questions.

WE ARE DELIGHTED TO ANNOUNCE that the Painting for Pleasure Group members have submitted yet more photos of some of their paintings.  You can see them here   Congratulations to our talented artists and our thanks to them for sharing them with us.

If any other Group members want to share news of their activities please email here with your contributions.  We don’t have a Newsletter at the moment, so do keep us informed of what you’ve been doing over the last year, or what your Group hopes to do once we can get out and about.

In April we ran our 2nd Zoom meeting and the presentations made were:

This meeting was recorded and we have a link available to view the entire meeting. If you would like a copy please send an email to the address below.
Our next Zoom meeting is on the 5th May at 10.30am. Please send an email request and we will send you an invitation.
The presentations this month will be:

Thank you very much to those of you who have already contributed to this section.  You can see the collection of our walks  here.  If you have a walk that you could send to us please use this form

A linear walk combined with public transport somehow seems more of an adventure than the usual circular, but does require a bit of planning with your timetable apps. This is a 5½ mile easy walk generally following the course of the River Arun but with woodland, villages and meadows taking you away from the riverbank at times. You will get the classic views of Arundel for the first part and later the South Downs ahead of you. Trains back from Amberley run approx. hourly, and there is a riverside café and a pub near the station to help fill in any waiting time.

The walking correspondent of the Times put this at No.1 in his feature article of top 20 most uplifting winter routes in the UK (26 December 2020). I am sure it is just as good in other seasons!

The Walk. Go left to A27 roundabout, right to riverbank, right onto Monarch’s Way. In ½ mile turn right to cross railway, immediately left along path beside railway for ½ mile, then right to road. Dog leg right/left into woods and after another ½ mile cross road and follow path to Burpham. Beyond the George Inn take the riverside path north. In 1½ miles, opposite South Stoke church, go right via North Stoke to riverbank opposite Houghton and then right to the station.

THE WINNER OF THIS MONTH’S PHOTOGRAPHY COMPETITION 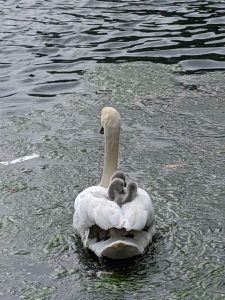 The Winner of this month’s Photo competition is Miriam Knight with her adorable picture called “Free Ride”.  A charming wildlife picture of three cygnets nestled on the back of their mother.

As  always there are no prizes, but just the glory of winning.  Congratulations Miriam.

The subject of the May Photography Competition is : 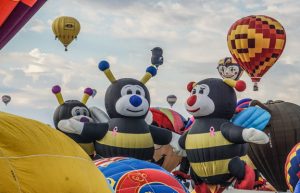 This month we would like you to have free range in the choice of pictures you submit for the competition.  That’s why it’s called “Anything Goes”.   Something you have found unusual, something beautiful, something funny, something memorable, anything, in fact, you thought “I must take a photo of that”.

Link to submit your photos: HERE

The Third Age Trust has arranged a number of online talks on a huge variety of topics, currently including  Maths, Yoga, Wicked Plants, Exploring Petra, a Ukelele Jam, Sophie Scholl (who joined the resistance to Hitler in Germany), two lectures on UK Geology –  in the Palaeozoic (when life began) and (later on) in the  Mesozoic  (dinosaurs), the story of the Volunteer Fire Service, Mary Quant, Summer Cooking, the National Trust, the Battle of the Boyne and What made us Human?

This week additions include  Bad King John, Egyptian Hieroglyphs, the Kindertransport and some more on Japan and Yoga,

Follow this link to their Online Events page. You must be quick to register for any session in which you are interested, because places are booked up in no time. While you are on the Third Age Trust website, find out about some of its other activities – for example the Latest News, the National Programmes (Bird Track, Maths Challenge, Paint or Draw, …), and its own online national branch (if you see what I mean),  Trust U3A, which runs groups on Zoom just like those of the local U3As. (It has a stupendous list of groups that you can join – for example, in Languages, there are groups, often several, in French, German, Modern Greek, Japanese, Spanish and, yes, even Welsh. Not Italian, surprisingly, nor English.)

You might also take a look at the SUN website  (Sussex U3A Network): normally they arrange study days at venues around the  county: currently they arrange  events online from time-to-time.
If you wish to unsubscribe from the Bulletin emails, please contact the membership secretary with subject “Unsubscribe from Bulletin”. This will not affect other email communications with the U3A. Please do NOT put the bulletin emails into spam! 🙁.
Please send me a message via the usual channels if you wish to have some item of U3A news put in the Bulletin. Likewise, if you have some constructive suggestions as to how to improve the Bulletin. Best wishes, David Rees and Miriam Knight 😎
The Constitution of the Chichester U3A is available to view here, and its Terms of Use here.
Enquiries If you wish to write to the Chichester U3A, then the correspondence address is: U3A Chichester, Box 809, Mailboxes Etc., 26 The Hornet, CHICHESTER, PO19 7BB
If there is an urgent matter that needs to be discussed then call 07460 109600, or contact the membership secretary .
Bulletin 210430